All aboard the Countess. 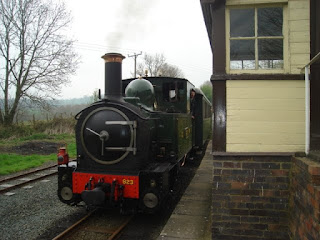 Spent the afternoon indulging in that unmatchable pleasure available only to Taids and Grans. Mrs D and I took little Ffion for a ride on the 'Countess'. First photograph is of her pulling into Castle Caereinion Station on the Welshpool to Llanfair Light Railway. We were the only passengers who embarked at this little used stop, though there were already lots of passengers already on board, having embarked at Welshpool. I'd thought that Ffion (18 months) is too young to enjoy a ride on a train. Very wrong. She was running up and down , communicating with everyone on the train - just like a politician on the stump. At present Ffion lives in Cork, but in about a year's time she's coming back to Berriew to live. If she's back before the General Election is called, she's could be a wonderful asset! 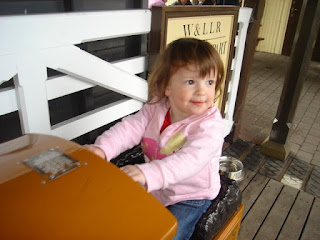 Anyway here she is - the little campaigner. One look from those eyes, and the votes will be in the bag. At Llanfair Station there is a teashop which serves as a refreshing waiting room while the 'Countess' is refuelled, ready for the return journey to Welshpool. Outside the Station Teashop door there's this little train which eats 20p and bucks gently like a lazy horse. I know this little train rather well. My own taid, who farmed further up the Banw Valley, used to send livestock to Welshpool Livestock Market on what was known as the 'Puffing Ginnie'. And for many years I competed in the 'Race against the Train' an 8 mile run along the road from Llanfair to Welshpool. Never quite managed to beat it, but came close. I remember being alongside the train, until losing ground on the long slope down to the finish. Didn't enjoy losing year after year, but Ffion, Taid and Gran all enjoyed themselves today.

rumour has it that ffion is a plaid follower glyn, your plaid opponent nobled here in ireland perhaps????

eric - I think I was a Plaid supporter when I ws Ffion's age!


I was fortunate enough to drive a diesel locomotive when I was around 5 years old, enjoyed trains ever since. If they were steam powered even better.

I think little Ffion would rather Ricin on her dummy than support Plaid.

Unless my mind has gone completely ga-ga I seem to recall that I was on the very last train that went right through to Welshpool station - a special that was organised just prior to the lifting of the town section. My father - an Oswestry doctor some how go tickets. It could be my mind playing tricks ....

Bonetired - The train did indeed go through the town to the station and to the livestock market - though I don't remember the line being used to transport livestock myself. But I do recall the main station being used to bring in farm goods. When I was young I used to drive down with tractor and trailer to collect loads of beetpulp etc.

From my brother:
"Not playing tricks, I was on it in 1963 ~ I can't remember where it started but I should think it started at the main railway station and went round the back of the houses, the line was built on a trestle formation over a river. It crossed the north-bound Oswestry road just north of the town-centre cross roads.
I remember it quite well as I was swinging from one of the carriages when the driver walked passed and collided with me! (The train was stopped!). I can also recall seeing the Earl and the Countess (nicknamed Him & Her) when they were stored in Oswestry railway works ~ covered in thick dust and tarpaulins but I was allowed to clamber all over them ………..happy days!"

Glyn Davies
I am the former Member of Parliament for Montgomeryshire.